The conception on foreign and security policy adopted by the Grand State Assembly in 1994 states that Mongolia wants to guarantee its national security and independence through balanced bilateral and multilateral relations and active participation in regional and international cooperation and integration mechanisms.

Even after the change of government in July 2016, no changes in Mongolian foreign policy are to be expected, said the then Foreign Minister Ts. Munkh-Orgil.

Relations with Mongolia’s two immediate neighbors – China and Russia – are still of great importance, as are the policies of the third neighbor, the “all-encompassing partnership” with the USA and Japan, South Korea and Europe will continue.

The traditionally good Turkish-Mongolian relations were put to a stress test in August 2018.

Had the Turkish secret service planned a kidnapping?

The Turkish director of the “Ulaanbaatar Empathy” school, Veysel Akçay, was dragged into a vehicle by strangers on July 27, 2018 and only reappeared after hours.

The case is being investigated by the competent courts in Ulaanbaatar, which is why he has not yet commented on what has happened, said Foreign Minister D. Tsogtbaatar to press representatives.

According to franciscogardening, the Mongolian ambassador to Turkey, R. Bold, had been ordered back home.

In addition, the Mongolian government had requested an explanation in notes to the Turkish Foreign Ministry and the Turkish Embassy in Mongolia.

Both the Turkish foreign ministry and the Turkish embassy had strictly denied any involvement of Turkey in the kidnapping.

Mongolia has been a member of the UN since 1961, the dialogue partner country of the ASEAN Regional Forum (ARF) since 1998, in 2007 Mongolia became a member of the Asia-Europe Meeting (ASEM) and in 2012 the 57th member of the Organization for Security and Cooperation in Europe (OSCE). In addition, Mongolia is seeking membership in the Asia-Pacific Economic Community (APEC). It has been an observer country for the Shanghai Cooperation Organization (SCO) since 2004 and takes an active part in the summit meetings, but has refused full membership for the time being.

In July 2016, Mongolia hosted the 11th ASEM summit in Ulaanbaatar.

The 20th anniversary of the ASEM dialogue was celebrated at the same time as the meeting.

In 1992, Mongolia declared its state territory a nuclear-weapon-free zone, and members of the Mongolian army are participating in UN peacekeeping operations in Iraq, Afghanistan, Sierra Leone and Bangladesh. 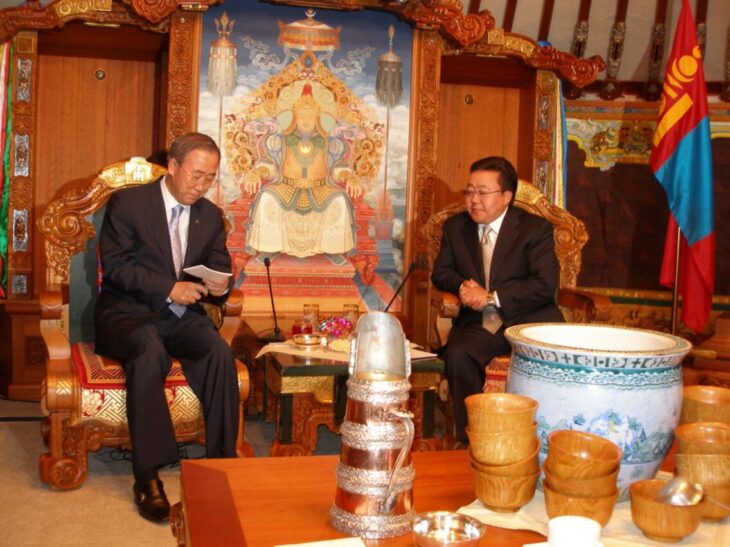 The German-Mongolian relations are always been at a high level. Regular visits at high and high levels underline this. In 1998 and 2008, Federal Presidents Herzog and Köhler made state visits to Mongolia. In 2006 the President of the Bundestag Lammert took part in the celebrations for the 800th anniversary of the founding of Mongolia, while Chancellor Merkel was on an official mission in Mongolia in 2011. The first state guest of the newly elected Federal President Joachim Gauck was the Mongolian head of state Ts. Elbegdorj in March 2012.

Germany is declared the most important partner in Europe for Mongolia, and both countries are linked by an “all-encompassing partnership”.

At the invitation of President Tsakhiagiin Elbegdorj, Federal President Joachim Gauck made an official state visit to Mongolia from October 14 to 16, 2015.

The military cooperation between the two countries has reached a high level.

In May 2020, the Minister for Economic Cooperation and Development (BMZ) Gerd Müller presented a new concept for international development cooperation “BMZ 2030”.

This is an important reform step for the 21st century.

From the list of 85 directly funded countries, 24 have been deleted, including Mongolia. It has developed positively and is now one of the countries with income in the lower average.

In the Human Development Index (HDI) it would take a leading position.

Other countries have been deleted due to insufficient implementation of the requirements. “Why should one support corrupt states that despise democracy”.

Emergency aid will of course be continued.

In a video conference in Ulaanbaatar and Berlin on November 18 and 19, 2020, both sides discussed the new direction of cooperation between the two countries.

In future, the focus will be on promoting civil society, NGOs and political foundations.

Ongoing projects would be completed. For these projects in the areas of sustainable economic development, energy efficiency and biodiversity, 22 million euros in technical assistance would be made available.

The EU and Mongolia established diplomatic relations in 1991. The EU delegation in Beijing initially took care of business in Mongolia before opening a mission in Ulaanbaatar in 2017.

On December 26, 2017, the then Foreign Minister D. Tsogtbaatar appointed the diplomat B. Mandakhbileg as special ambassador for work with the EU in connection with the “black list” of tax havens.

This list, drawn up by the EU finance ministers, includes 17 countries, including Mongolia. The aim is to motivate these countries to have more tax transparency and data exchange. Mandakhbileg works on behalf of the Ministry of Foreign Affairs and the Ministry of Finance. Mongolia aims to be included in the Organization for Cooperation and Development (OECD) Global Forum on Transparency and Data Exchange.

In 2020 Mongolia was removed from the FATF’s “gray list”.